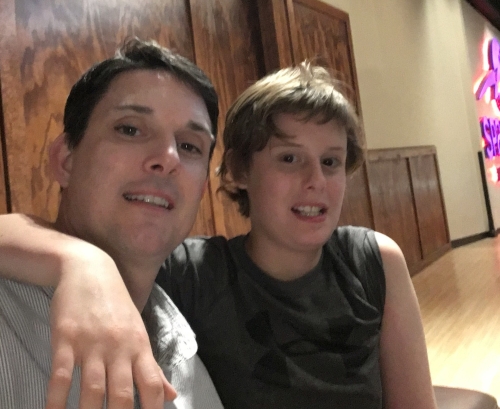 It took us a while – but we are buddies

If I’m being honest, I probably never thought my son, William, and I would be buddies.  After he was diagnosed I went into a depression and malaise regarding him and regarding what I anticipated the future with a child on the spectrum would look like.

Initially those anticipations proved to mostly be true…William and I would do things together but I never got the feeling that we were developing a relationship or bond or that either of us really craved being together.

William is still really quiet.  He has language but doesn’t initiate talking (unless he wants something badly enough) and he’s not one for having conversation.

What he can do (and does a lot) is respond to my questions.  He tells me when he wants something.  He tells me if he likes one thing or another.  He will answer in his own way – maybe not with words but with a hug or kiss or simply by not leaving the room immediately if I enter.

In the last blog I mentioned his penchant for doing puzzles.  That has become something we do together.

We went a TCU vs Texas basketball game together earlier in 2018…that was something I never thought we’d do.  He’s never going to follow players and their matriculation through high school to college to the NBA like I did (and still do), but he enjoyed clapping, high-fiving, eating popcorn and other treats when we went to the game.

We are now buddies.

To read more blogs from Melanie, Seth and TheFowler4Group, check out their Website (www.lookatmyeyes.com) and while you’re there, buy a copy of their book, “Look At My Eyes”.  Or find them on YouTube.  To contact TheFowler4 Group email: info@thefowler4group.com